The island of Barbados is well-known for many things… its sea and sand; hospitable locals; its historical significance and, of course, its rum. With sugarcane grown and harvested on the island for over three centuries, Barbados became a significant player in the production of its by-products such as sugar, molasses and rum.

The sugarcane plant was introduced by the Jewish community who fled South America and settled in Barbados in the 17th century. During the period of enslavement and colonialism, this became the primary crop, creating significant wealth for the British plantation owners over the next few centuries. Thousands of enslaved people worked the land and harvested the crops. Some historians claim that it was those enslaved people who discovered that an alcoholic beverage could be produced by fermenting the cane juice and molasses.

Today, there are distilleries, rum vaults and several rum shops on the island, where you can learn about the details of the history and production of Barbados rum, or simply enjoy the beverage with the locals. Below are a few places you might want to consider on a Barbados rum tour. 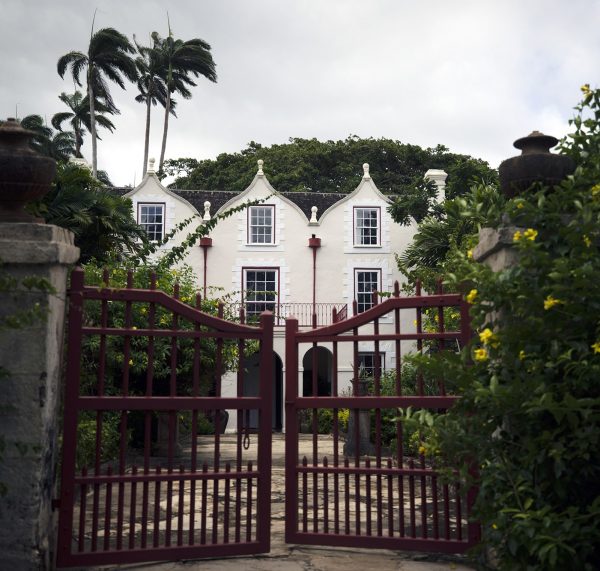 With over 300 years of rum-making expertise, the Mount Gay Rum Distillery boasts of being the oldest producer of Caribbean rum globally with uninterrupted operations. It is no wonder that it’s one of the most popular stops on any Barbados rum tour. The distillery still uses the original well which was dug in the early 18th century. Filtered by the island’s coral stone formations, it is the naturally purified water along with molasses (also called ‘black gold’) that make up the key ingredients in Caribbean rum. Like their well, their distillation technique has stood the test of time, having been unchanged since 1703.

Tours of this historic distillery are open to the public. There, you will be guided through a process that has been refined with 300 years of expertise. Explore the estate, marvel at the original well and walk through the molasses, fermentation and distillation houses. Experienced guides will show you how to choose the best ingredients and give you a step-by-step breakdown of the rum production process, followed by samples of some of their finest blends. You can also choose to create your own blend of rum with help from their Blending Team which, by the way, includes Barbados’ first female Master Blender, Trudiann Branker! 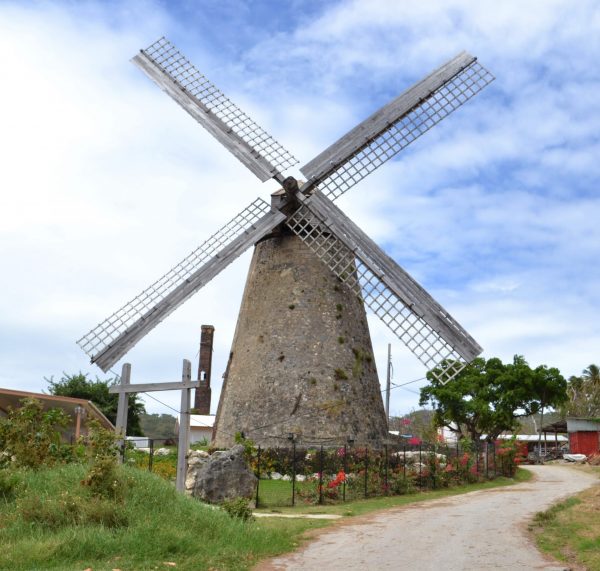 Just up the hill from Morgan Lewis Windmill is the picturesque St Nicholas Abbey, where sugar production dates as far back as the early 18th century. However, this plantation faced some difficulties over the years due to the high cost of producing sugar. The introduction of a steam engine in 1890 boosted production and positioned St Nicholas Abbey as one of the top plantations on the island.

Visitors are welcome at St Nicholas Abbey, where they are guaranteed a full history lesson on the significance of this property in Barbados’ sugar and rum production. A visit will include a tour of the magnificent great house and a 30-minute movie which depicts plantation life. An experience at the Abbey would not be complete without a tour of the steam machinery and mill, led by owner and distiller, Larry Warren. Needless to say, it wouldn’t be a rum tour without rum, and guests at the Abbey are guaranteed a complimentary drink, official rum tasting and a souvenir miniature bottle of their 5-year old St Nicholas Abbey Rum.
The St. Nicholas Abbey Heritage Train (steam-powered) 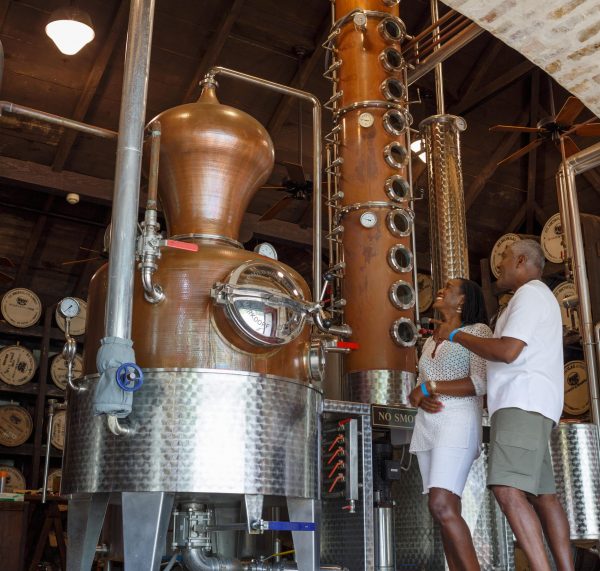 Over in St Philip, situated on an expansive plot of land, is the Foursquare Rum Distillery. A former Barbados sugar plantation which dates back to around 1720, this distillery was reopened in 1996, and to this date, operations have been steadily continuing to grow. Touring this facility is quite different from the other distilleries since guests are invited to take a self-guided tour. Nonetheless, it is an equally enlightening experience. Large panels are strategically scattered throughout the distillery, explaining their process of rum production to guests as they walk through and the aroma of the production process seems to fill the air around the factory.

The Foursquare factory is especially a favourite among environmentalists since the distillery reuses the cane trash to provide clean energy which powers their machinery. They also capture and sell the gases that are produced during the fermentation process and have a wastewater treatment facility on site. This makes Foursquare an outstandingly environmentally conscious factory – a definite bonus which you can meditate on while enjoying samples of Barbados rum from their on-site bar. 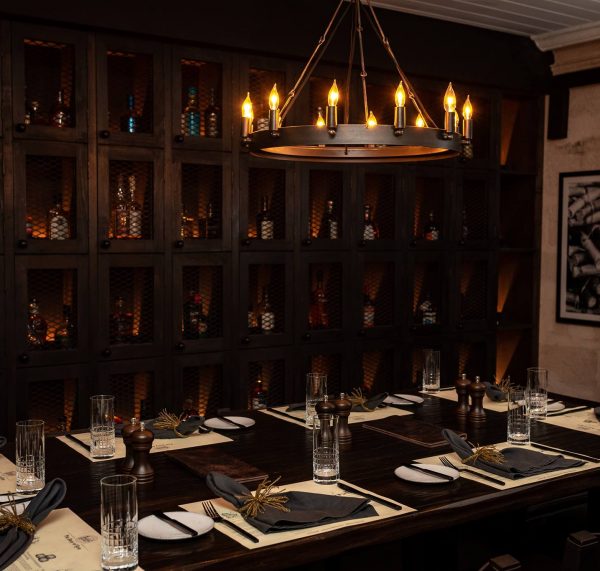 Perhaps a distillery tour doesn’t quite grab your interest, but you still want to experience some of the finest rum that the Caribbean has to offer. We’ve still got you covered! You can visit the Colony Club’s Rum Vault on the West Coast of the island – the first of its kind in Barbados. There, you can satisfy your tastes with over 150 varieties of rum from the Caribbean and around the globe. But it’s not all just-drinks at Colony Club! Their Storied Rum Dinner and Tales from the Vault Dinner experiences provide guests with the opportunity to engage with the Rum Ambassadors who will share the histories of rums and rum production while savouring a three or four-course meal, paired with signature rum cocktails. Or, if you don’t fancy a full meal, you can savour their Tapas, Rum Flights or Rum and Chocolate offerings. At Colony Club, there is a treat for every taste!2 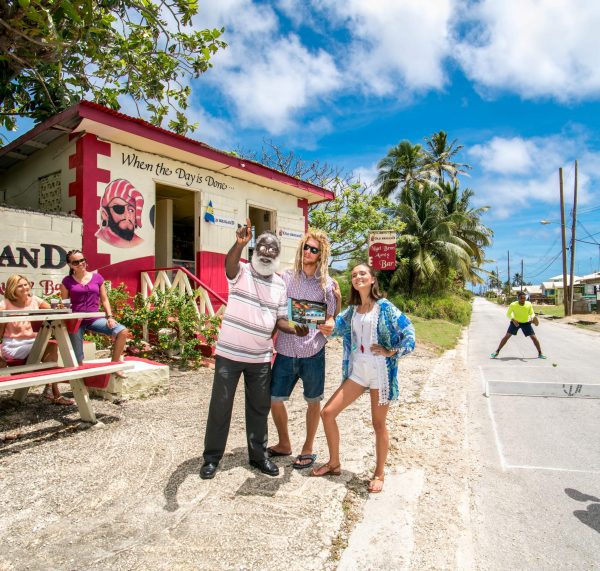 Rum is a social drink in Barbados, often enjoyed among friends while discussing the latest happenings of the day. If you want to experience that village life, to join in the local rum culture, and partake in some of the best local foods…then your stay in Barbados would not be complete without a visit to a few of the rum shops that are scattered across the island. You can sample this culture by merely walking into any rum shop, or you might choose to book a rum shop tour through any of the tour companies in operation on the island. Either way, residents and rum shop regulars will welcome you with open arms and engage you in conversation over a flask of their favourite rum!

Whether you are looking for a historical Caribbean rum distillery tour, an evening of fine dining or a more relaxed, village-like atmosphere, rum can be a feature of your time here in Barbados. Just come and see for yourself why the island can boast of producing the finest Caribbean rum in the world.